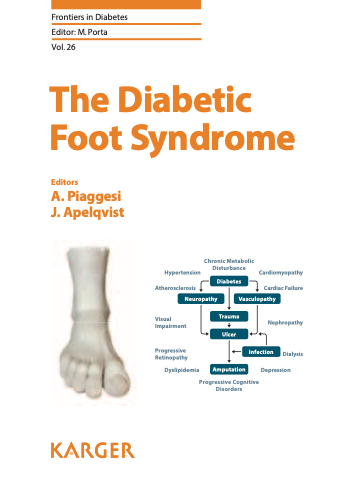 In Frontiers in Diabetes, dedicated to the Diabetic Foot Syndrome, we collected 16 contributions from some of the most experienced and qualified scientists and clinicians, to give an up-to-date picture of the clinical scenario, the more recent acquisitions in the understanding of the mechanisms of the pathology, the current standards of therapy and the organizational tasks a modern approach to such a complex pathology deserves.

Diabetic foot (DF) is a complex pathology, with a multifactorial pathogenesis and with multidimensional clinical patterns, ranging from a prevalently ischemic condition progressively evolving towards a critical end stage, to a pure neuropathic disease with an alternation of chronic stable phases and reactivation, alongside with mixed neuro-ischemic forms, all leading to ulcerations and eventually complicated with infection).

This pathogenetic and clinical complexity, which develops during a long and usually almost asymptomatic pre-clinical course, dramatically turning into a hyper-acute phase, evolving frequently in a chronic conditions with a high risk of recurrences, should be identified with the more appropriate definition of Diabetic Foot Syndrome [DFS], encompassing all the aspects of the disease.

In this issue of  Frontiers in Diabetes, dedicated to the Diabetic Foot Syndrome, we collected 16 contributions from some of the most experienced and qualified scientists and clinicians, experts in the different aspects of the disease, trying to give an up-to-date picture of what is the clinical scenario, which are the more recent acquisitions in the understanding of the mechanisms at the base of the pathology, which are the current standards of therapy and what are the organizational tasks that a modern approach to such a complex pathology deserves.

We asked all the contributors to deliver a paper which should be as much informative and straight-to-the-point as possible, including not only their own experience in the field, in any case, relevant for the issues for which they have been selected, but also giving the wider picture that could link each section to the other, so to produce an issue of "frontiers in Diabetes" that would be more than the sum of the single contributions, and which could be worthwhile reading not only by the specialists but also by a wider audience, made of all the caregivers involved in the management of the patients at risk for developing the pathology, those affected and those who are at risk of recurrences.

From an epidemiological survey of what it is actually considered a global pandemic to the different insights on the pathogenesis of the disease, including a very interesting original review by Nina Petrova on the recent findings in the pathogenesis of Charcot's foot and their links to the clinical presentation, and a review made by Coppelli et al. on the role of micro-angiopathy in the determinisms of DFS, not to forget the weight that co-morbidities have from a clinical and prognostic point of view, analysed by Meloni et al.

A relevant section of the issue has been dedicated to the clinical forms of the pathology, with a special emphasis on infections, included in the contributions of Carlo Tascini and Eric Senneville, and on ischemia, for which Ferraresi et al. reviewed the indications to revascularization while Mike Edmonds correlated the pathogenesis of the diabetic macro-angiopathy to its clinical presentation.

The therapeutic approach has been developed giving a wider room to surgery than in other settings dealing with diabetic foot syndrome because it has gained an important place in the therapeutic strategy for this pathology. Javier Aragòn - Sanchez developed a section on the surgical management of DF infections, while Dalla Paola et al. did the same for the surgery of the Charcot's foot; but also other crucial aspects of therapy were included, such as offloading, written by Sicco Bus, and local care, by Fran Game.

Last but certainly not least, the organizational aspects, with a discussion of the role of a dedicated network in the management of the DFS, the importance of an integrated approach for the successful management of the ischemic foot on the structured dedicated program that Prof. Joseph Mills implemented at the Baylor College of Medicine in Houston, and the re-evaluation of the outcomes made by Clerici et al, were integrated into the issue, because of their importance and actuality.

After having read the contributions all of great quality, we feel to have accomplished the task and we hope that this issue will take its place on the desk of the maximum number possible of people interested in the management of the diabetic foot syndrome.