The global burden of diabetes and foot complications: the facts.

1 in 11 adults has diabetes

In 2017, approximately 425 million people of the global adult population have diabetes.

Some regions will be more affected than others (see Table 1).

Diabetes can increase the overall risk of dying prematurely

Diabetes was the seventh leading cause of death in 2016.1,2

Diabetes can lead to complications

Diabetes is a major cause of blindness, kidney failure, heart attacks, stroke and lower-limb amputation.

Worldwide, every 20 seconds a limb is lost due to diabetes

People with diabetes are 10 to 20 times more likely to experience an amputation compared to those who do not have diabetes.

Diabetes can damage the nerves, in particular those in the feet

1 in 7 people with diabetes will develop a foot ulcer

The prevalence of diabetic foot ulceration varies greatly between different countries3, whereas for many regions, it is not fully known (see Table 2)

People with diabetic foot ulcer should be promptly referred to a foot protection team for appropriate management.

Life expectancy following a lower limb amputation is significantly reduced. Almost one-quarter of people die within 30-days of amputation, almost half at 1 year and up to 80% in 5 years.6 The 5-year survival rate after a lower-limb amputation is lower than that in common cancers, noticeably demonstrating the frailty of this population. 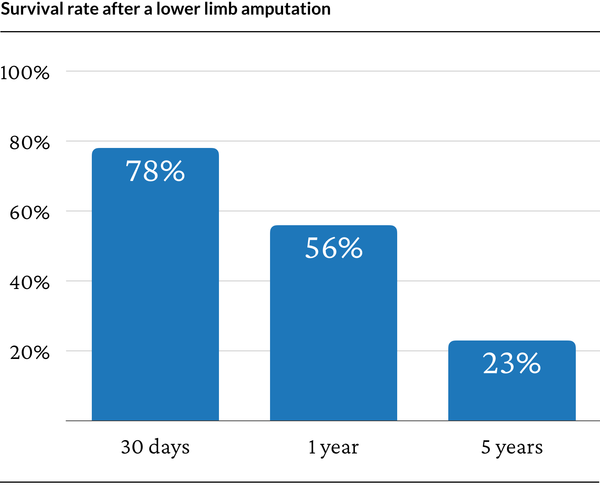 Data from a multicentre European study reported that the estimated annual cost for managing a diabetic foot ulcer is $ 13,561. The cost of amputation ranges between $ 35,000 and $ 45,000 in the developed countries, whereas the cost of amputation in developing countries is substantially lower. Despite the reported difference, with the expected rise in the prevalence of diabetes worldwide, treatment costs of diabetic foot disease will pose globally an additional burden to society and the projected treatment costs will be immense.

The time to act is now 8

The key strategic priority of D-Foot International includes the improved worldwide survival of the diabetic foot with an overall goal of achieving a global reduction of diabetes-related lower-extremity amputations.